Suzanne Sangster: The PR Campaign for Anthony Seldon’s May At 10

Even after working in PR for over 30 years, I still get a thrill when I open the weekend papers and find that one of the books I am working on has been reviewed, particularly if it is Book of the Week and if there are reviews in several papers over the same weekend! While PR has changed enormously since I started, with review space in traditional media contracting, and digital coverage like blogs and podcasts now an important part of all campaigns, getting national press and broadcast coverage is still the goal!

When I returned to Biteback this April, I was excited to learn that I would be working on Anthony Seldon’s new book May at 10, which is the definitive account of Theresa May’s premiership. Seldon, one of Britain’s leading contemporary historians, has written authoritative histories of the previous five Prime Ministers, which have all been critically acclaimed, and May at 10 is Biteback’s lead title this autumn – so no pressure!

Planning the campaign was a team effort, so myself, our Publisher James Stephens and Editorial Director Olivia Beattie met with Anthony and his agent Martin Redfern in August to start planning and putting together a timeline of activity. The book had taken slightly longer to write than was anticipated, so we agreed to move publication to the beginning of November in order to get those all-important reviews in before the national papers start their Christmas roundups.

Once the finished manuscript was delivered in mid-September, the first thing to be done was to secure a serialisation with a national paper. James looks after this, and there were a number of newspapers interested, but it was agreed with Anthony that the serial would go to The Times. They would run a series of exclusive extracts over a week and had total exclusivity until 7th November. Serialisation is a mixed blessing. On the one hand you have guaranteed coverage in a national paper, which is often picked up by other areas of the press, but on the other hand the book is embargoed until that date, which makes setting up reviews and interviews rather difficult. 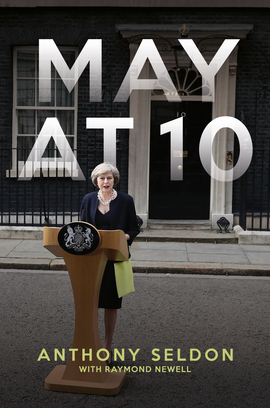 The literary editors on the national papers were keen to have the book for review, so they signed NDAs and we sent over PDFs of the manuscript in order that reviews could run as soon as the embargo was lifted and before Christmas coverage began. This worked well, with reviews running over the course of a week in The Times, the Guardian, The Sunday Times and the Observer, with the book being selected as Book of the Week in The Times and the Observer.

Another important part of the campaign is broadcast. I secured first interview with Anthony on BBC Radio 4’s Today programme, which was followed by an interview on BBC Radio 5’s Emma Barnett Show on the day of publication. ITV’s Good Morning Britain wanted first TV interview, and this was followed by interviews on the Adam Boulton Show on Sky and the BBC’s Politics Live. Other broadcast has included the World Service, RTE’s Marian Finucan Show, TalkRADIO and BBC Berkshire. I enjoy accompanying authors to these interviews (despite the often very early starts!) – it is important to make sure the author is in the right place at the right time, to help calm any nerves and answer any questions they might have about the programme. Seeing live TV and radio in action is always fun, and you never know who you might meet in the green room!

Finally, most authors like to celebrate publication of their book with a launch party. Anthony is incredibly well connected and wanted the party to commemorate Jeremy Heywood, the former head of the civil service, who passed away a year ago and to whom the book is dedicated. The problem was, Anthony anticipated that about 300 people would attend, and the budget was relatively small, so finding a suitable venue at short notice proved a bit of a challenge! In the end Anthony secured a room at the Royal Over-Seas League which could hold around 200 people, and the party was held on publication day.

Other elements of the campaign – including interviews on podcasts, further reviews, a social media campaign on Twitter and Facebook, a feature on the book in our monthly newsletter, and appearances by Anthony at literary festivals across the UK over the course of the next year – all work together to ensure the campaign is a success and that the book is promoted not just around the publication date but over the coming months as well. At some point you wonder if everything will come together in time, and when it does you do feel a thrill, particularly when the book reprints during the week of publication. If the author, the agent and your colleagues are happy then you know you have done a good job!

Suzanne Sangster is the publicity director of Biteback Publishing.