The Battle of Ideas festival, an annual weekend of public debate and discussion, has been running for 15 years. Last weekend, at the Barbican centre in central London, we hosted 100+ debates, with over 450 speakers and over 3,500 audience members with debates on everything from polygenic scores to populism to riotous ballet productions.

With all this in mind, it’s almost unbelievable to think we do this with an office team of less than ten incredibly hard-working people. 15 years ago the Battle of Ideas festival was set up by Claire Fox, the director at the Academy of Ideas, and this year I was the co-convenor of the festival, along with my colleague Alastair Donald. As is always the way, we started off with a dedication to pick out the most engaging and important debates in politics, the arts, science and tech. But as 2019 wore on, and the world seemed to get more animated (and sometimes more mad), we were forced to expand the festival to one of our biggest yet. Taking over the Barbican centre from top to bottom, with rooms hosting debates on the attacks on the Kurds, the demise of the automotive sector, the role of political advisors and the status of gross-out feminism, what we ended up with was a cornucopia of debate topics.

People think it’s hard to have public debates these days – whether that’s to do with a general unease about the coarsening of public discourse, or the more entrenched ‘You Can’t Say That’ culture. The prevalence of ‘echo chambers’, ‘cancel culture’ and the mainstreaming of censorship has made some nervous about speaking their mind. But we’ve found that, if you know your subject, and you’ve got the guts to trust an audience with a debate topic, you can facilitate genuinely open and civil public discourse. The Battle of Ideas festival creates an atmosphere which gives people the confidence to talk about difficult issues – but also challenges people to step outside of their intellectual comfort zone. How else can you be sure about your own views, if you don’t listen to opposing ones? 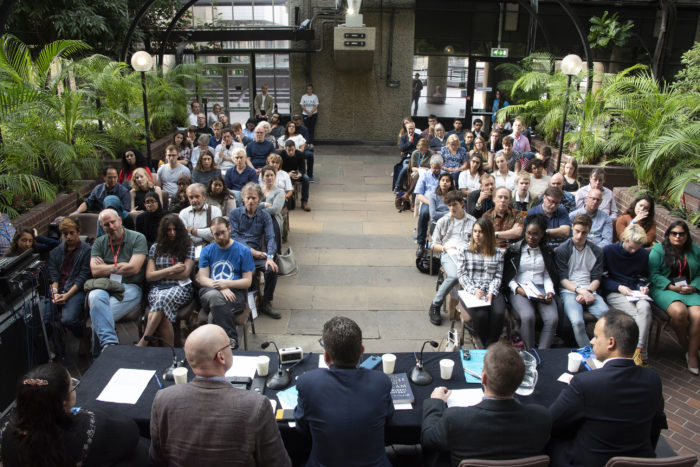 This year we put together panels on white privilege, knife crime, mental health, toxic masculinity and yes, Brexit, and our audience rose to the challenge of tackling thorny political issues. In a discussion on visions of the future — in which the controversial issue of Extinction Rebellion’s hijinks took centre stage — panellists and audience members engaged in a feisty but informed debate over the future of the planet. No one was triggered, no one was offended — and everyone came out having their preconceived ideas shaken, even if just a little.

As the festival co-convenor, I had the pleasure of chairing a number of debates. One fiery exchange between a Lord and a critical member of the public in the audience opened up a much wider discussion about the concept of ‘the people’ — and whether or not we can understand our current political moment as a division between the establishment and the populace. But it was a strand I ran which took ‘dissidents’ — abortion activists, comedians and others — which stole the show for me. In particular, a discussion about the working class I chaired with a trade unionist and an ex-striking miner was electrifying. There are hundreds of literary festivals, political conventions and talking shops that host what you might unfavourably term members of the ‘liberal elite’ talking to others like them about the rest of society. We cut through all that, with two guys who’ve got genuine life experience, spending an hour engaging an audience in a frank and honest discussion about one of the most difficult and historically loaded issues of our time.

If you’re there, you’ll know that the Battle of Ideas festival doesn’t feel like your average public event. You have to shout to be heard at the drinks receptions because everyone comes to carry on the debates. During the debates, you’ll be handed the microphone to speak by a team of volunteers who aren’t just there to work, but to be heard ¬— who get up in debates and make storming contributions to rival the expertise of the speakers on the panel. Once you’ve experienced what it’s like to be at one Battle of Ideas festival debate, you’re hooked. We take our slogan — Free Speech Allowed — incredibly seriously. For that reason, there truly is no event like it.

I’ve spent the last year doing everything from trying to wrangle the best academic to speak on the issue of drug legalisation, to lugging boxes of audio recorders and banners across London, to standing on streets handing out leaflets to strangers to tell them all about our festival. And now, as the Battle of Ideas festival is over for another year, it’s time for the team and I to start thinking about what 2020 might hold for us. Our partnership with the Barbican Centre has come to an end — after a wonderful eight years. This has posed the exciting challenge for us to start thinking about what shape the next festival might take with new sponsors, new venues and new partners. If you want to be part of something truly extraordinary, get in touch. Join us, as we try to make sense of a world in flux.

Ella Whelan was the Battle of Ideas festival 2019 co-convenor. She is a freelance writer and public speaker on a range of political issues, with a focus on feminism.