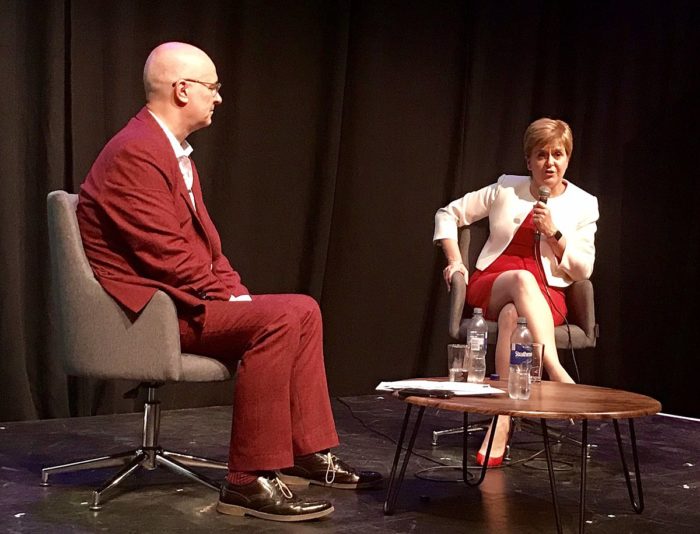 As my run of 24 shows at the Edinburgh Fringe has now concluded, I thought I’d reflect on the whole experience. I have to say that I’m suffering a bit from the post Fringe blues, and there’s part of me that wishes I could have done the whole month. So how did I come to do it?

About nine years ago I was invited to take part in the Edinburgh Book Festival, but while I was there I went to see a couple of shows on the Fringe, including one with a very funny German comedian called Christian Schulte-Loh. I was hooked. I’ve been back on five occasions since, and each time I had a whale of a time. I always went on my own and stayed at the George Hotel. I’d stay for two or three days and pack in as may shows as possible, each time booking them all in advance. I’d see 15-20 shows on each visit, ranging from a musical about the Bay City Rollers to a three man play about being a West Ham fan – from Gyles Brandreth to a whole host of stand-up comedians.

But it was going to In Conversation interviews that really made me think about doing my own show. While I’d love to think I can do stand-up, that would be too much of a risk. I remember winning an auction prize at a James Whale charity fundraiser for kidney cancer which enabled me to go on a course on stand-up comedy. To my eternal shame I never did it. I just knew that I am only funny when I’m spontaneous. I have a pathological inability to learn lines, or a script.

I remember seeing Matt Forde interview the Conservative MP Tim Loughton at the Pleasance Cabaret Bar. It was packed. ‘I could do this,’ I thought to myself, but I had no idea how to take it forward or even if I should do so. I had a word with Gyles Brandreth, who does a show every two years on the Fringe and always sells out, and he said I needed a promoter. I had no clue how to get one.

Anyway, last summer I signed up with Northbank Talent Management to represent me in the media, corporate and literary worlds. In our initial meeting I mentioned the Edinburgh idea and lo and behold they said they would introduce me to James Seabright, one of the leading promoters at Edinburgh. A few weeks later we met at his office at the Palace Theatre and I outlined my thinking to James and he immediately understood. I showed him a list of around 85 guests who I thought I had a reasonable chance of getting. We agreed we’d do an initial run of nine shows and James booked us in at one of the Fringe’s best venues, the Gilded Balloon. The room he booked was the Wine Bar, which I knew from having seen Geoff Norcott perform there last year.

We then increased it to 12 shows, and I started booking guests. It proved surprisingly easy. I didn’t want only politicians. I decided to ask people from the media too. The lineup was completed by the middle of April, which is when tickets went on sale. My headline guest was Nicola Sturgeon, the Scottish First Minister. I was delighted she agreed to do it, given I had never managed to lure her onto my LBC show in nine years. Other guests included CNN’s Christiane Amanpour, Kirsty Wark, Jess Phillips, John McDonnell and Sadiq Khan. Tickets went on sale and started selling very well indeed.

In early June, James rang to say that the Gilded Ballooon had been in touch to ask if we’d like to do a second run of shows at 6pm in another of their venues at the National Museum of Scotland, because the act booked in there had cancelled. I had ten days to see if I could book another 12 guests. I achieved it with hours to spare. And a bloody good lineup it was, even if I say so myself.

Now it was all down to marketing the events. Back in June it all seemed a long way off. I had done a photoshoot with a brilliant photographer called Steve Ullathorne earlier in the year, and I dressed up in my crimson suit, just to make a bit of a statement, that this wasn’t going to be your normal, dry political interview, we’d be providing a bit of entertainment too. I recorded a promo video, the posters were designed and a website was launched. Every week I’d get a breakdown of ticket sales. It was obvious which shows were going to sell out, and which would be, er, challenging.

I flew up to Edinburgh on Tuesday 30 July, a day before the debut show with Sayeeda Warsi. I wasn’t pleased to discover I was staying in student accommodation, although were I a student I’d have been very pleased with it. There was no TV and it was, shall we say, a tad basic. At least I had my own bathroom!

The first three shows were so-called ‘Previews’. I don’t think I’d quite understood this concept, but while it works for comedians to hone their acts, it wasn’t really necessary for a show like mine. Because I had different guests each day, I didn’t really have an act to hone.

Suffice to say, I don’t think we put on a bad show. All the guests performed brilliantly and the audiences seemed incredibly happy with what they heard. As time went on, I dispensed with any notes and just went on stage ‘naked’ so to speak. I found that it actually enabled it to be a proper conversation, rather than an interview.

So, a few memories… I was advised to do my own flyering outside the venue. I hugely enjoyed it. I remember one chap coming up to me before a show brandishing the show flyer. ‘Are all these people really coming?’ he asked in disbelief. ‘Of course,’ I replied. ‘What, you mean Sadiq Khan is actually coming to Edinburgh – you mean the real Sadiq Khan?’ ‘Yes, I replied.’ He walked away and then immediately came back. ‘How on earth do you get all these people?’ he asked. ‘I have a good contacts book,’ I retorted. He seemed satisfied at that. 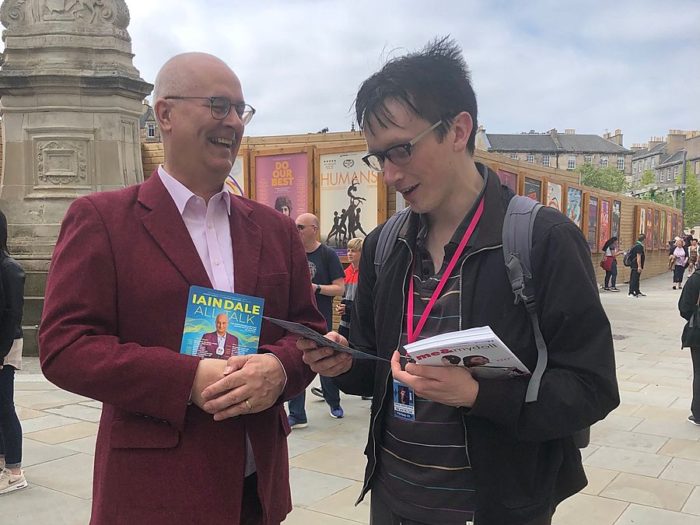 On the evening of the second day, I was a guest ‘storyteller’ at fringe event called The Big Gay Story Slam. Indeed. I had to spend 7 minutes telling a story from my life revolving around my homosexuality. I was a bit concerned when the first two people turned out to be professional comedians. Oh dear, why did I agree to do this, I kept thinking to myself. Then it was my turn. I talked about what it was like getting selected as a Tory candidate and the effect being gay had on my chances. I got a few laughs and it all seemed to go OK. I didn’t actually realise it was a competition, but the drag queen hosting it suddenly announced I had won! Sadly there was no prize.

On the Saturday evening I went for a drink in the Gilded Balloon garden with Neil and Christine Hamilton. It was the first time I have ever really felt under public gaze. One after another people would come up and want a selfie or a quick chat – and it was mostly me they recognised! Lots of LBC listeners, people who have seen me on Newsnight or wanted to talk about the Tory leadership hustings. Until then, I don’t think I realised what that few weeks did for my public profile. Indeed, as the week wore on, I could hardly walk 100 yards without someone wanting a chat. I’m not complaining about it all, it was actually quite heartwarming.